fmux - A tmux configuration for people who still have F-keys

It’s been a while1 since I’ve written anything here. Let’s get started with a little post about a project I’ve been using for a while.

fmux is a tmux configuration file that shamelessly rips off what I consider to be byobu’s most important and useful features, but without as much overhead. I’m currently maintaining a version for tmux versions 3.0 or greater, as well as a version for tmux 2.9 that should also work on earlier versions, although it might occasionally complain about certain appearance settings. I might build a version for tmux 2.6 at some point, since it’s what’s provided on the current Ubuntu LTS.

You might not find this super useful if you’re using a 60% (or smaller!) keyboard, although I get by fine with judicious use of the Fn key.

Full details, as well as the current set of provided keybinds, at the GitHub repository.

I eat a lot of junk food. Here’s my thoughts on some new things I tried recently.

If you’re unfamiliar with what I consider to be a uniquely Mid-Atlantic/Pennsylvanian phenomenon (namely, gas station conveninece stores having half-decent delis inside serving actual food), here’s the rundown:

The ordering process is where things started getting a bit funky with these sliders. I wanted cheese, and the touchscreen offered a few different options (both white and yellow American, cheddar, provolone). I picked cheddar, and after I paid the people at the counter asked me if I wanted the shredded or sliced cheddar. Seemed like an odd query, and I’m going to chalk it up to unfamiliarity with a new menu item.

The sliders come in the same box they use for hot dogs. 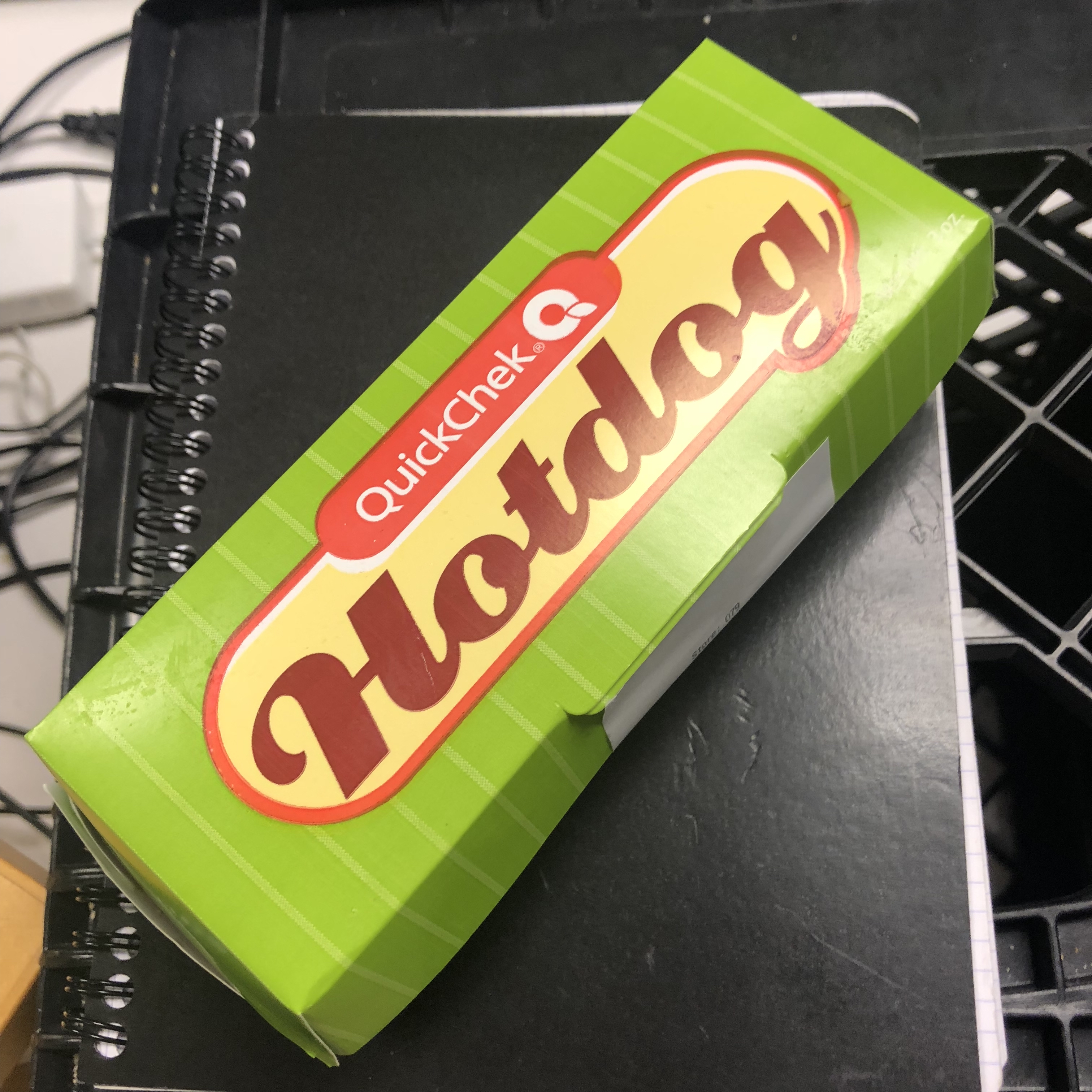 This amused me more than the sliders themselves did. 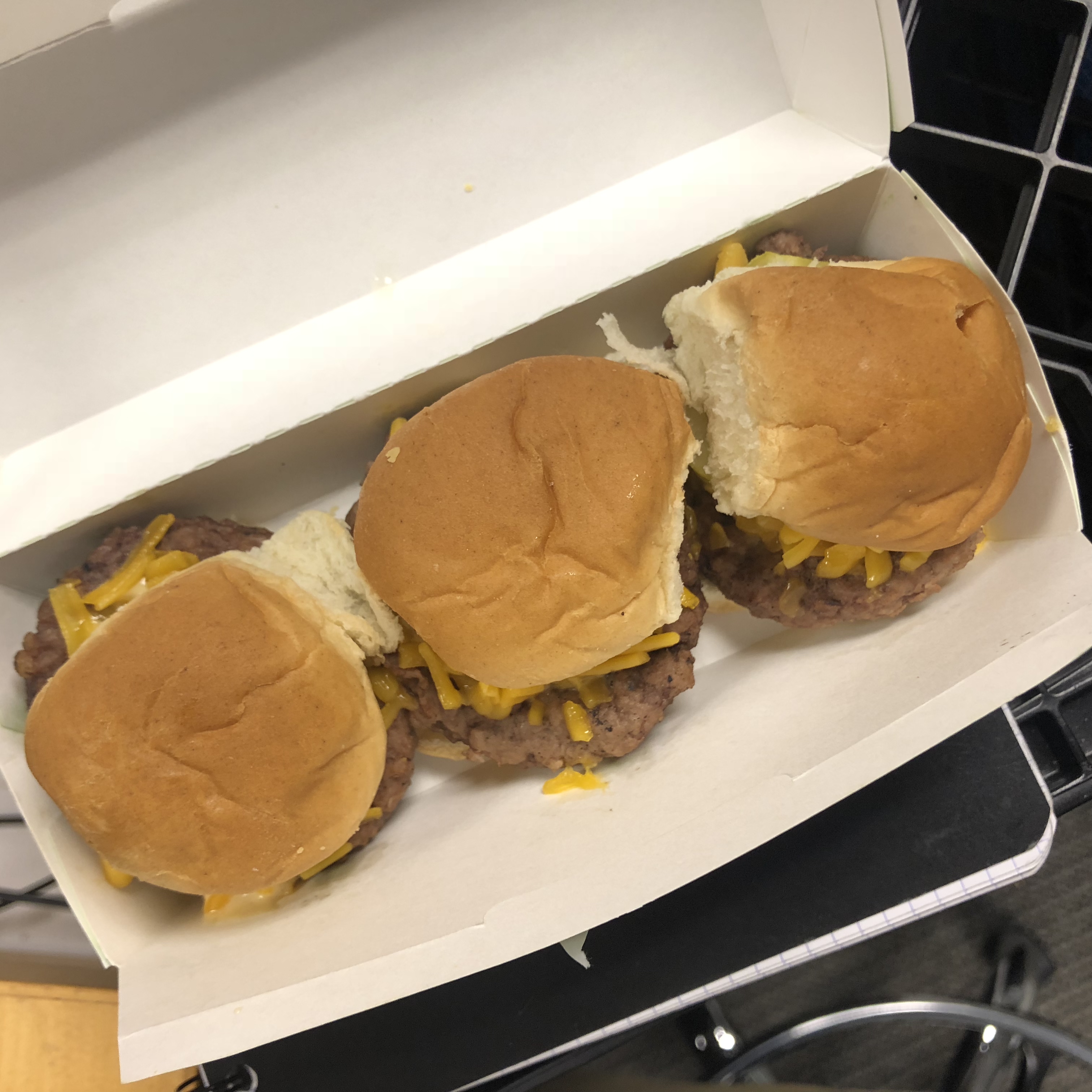 How do they taste? Fine. They’re okay. The beef patty reminds me uncomfortably of the hamburgers Sodexo serves in college dorm cafeterias. It’s as generic a burger as you could ever hope for. One of the available condiments is a horseradish mayonnaise, which is pretty good. I found this more interesting than the sliders themselves. 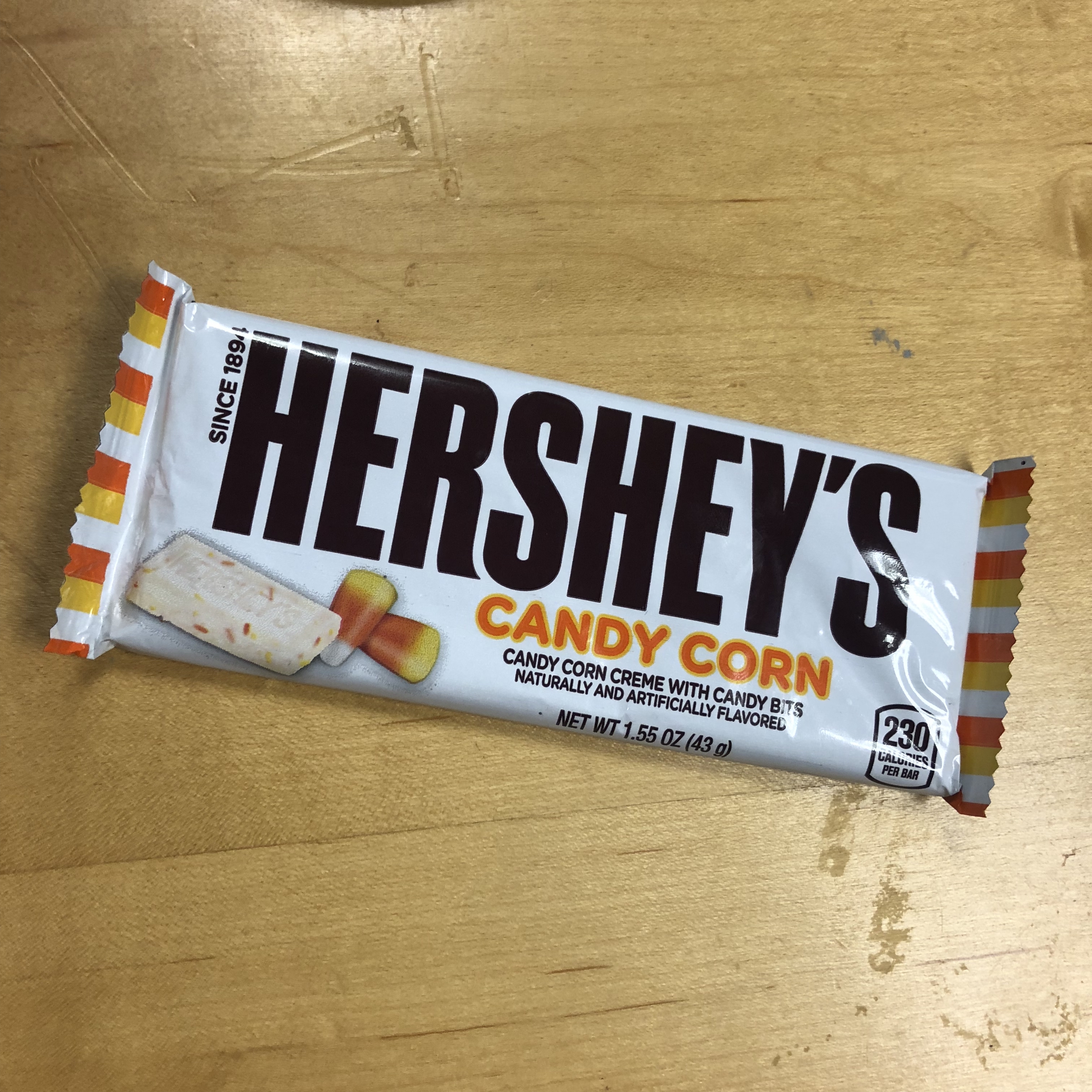 Full disclosure: I like candy corn. Many people don’t, and that’s fine! If you don’t like candy corn, though, you’re not gonna like this candy bar. You might not like it even if you do like candy corn. I couldn’t finish this. Whatever the “candy corn creme” is made of, it’s cloying to the point of painfulness. I had one square of it, then another to confirm my findings… that was enough. The smell hits you first – crack the wrapper open and it smells strongly of sugar, a painful wave of saccharine artificiality.

Washing the dishes isn’t fun. It especially sucks when they’ve just had tomato sauce in them. The microwave’s right there, and it’s much faster than waiting for a big ol’ pot of water to boil. Here’s how I cook pasta for one person.

The cook times on the back of the pasta box are dead wrong. I like it al dente, and if I followed those times I’d have sad and limp noodles.

Before I go any further, you really should go read John Siracusa’s magnum opus on how to cook pasta. If you’re cooking for 2 or more people, just follow his guidelines instead. I’ve cribbed from this liberally for the microwave method I use.

No, really, go read it. This’ll still be here when you’re done.

In Which I Contradict Myself

You can buy plastic gizmos at the store, or you’ll see them advertised on TV, that claim to be perfect for cooking pasta in the microwave. They probably work, but…there’s no secret to them. I use a large Pyrex1 measuring cup and it works fine. The key part of those devices has nothing to do with the device itself: it’s just that they tell you to cook the pasta for 2 to 3 minutes longer than the box says to. We’ve already established that the box times are bullshit, but since I usually knock 2 to 3 minutes off that time to get a good estimate of how long to actually cook the pasta for…

…just cook the pasta in the microwave for as long as it says on the box. Really.

Pour some pasta into a microwave-safe vessel with plenty of extra room at the top. I use a 4-cup Pyrex measuring cup. Salt the living daylights out of your pasta, then add cold water from the tap. There should be enough water to cover the pasta after it expands, and ideally your vessel is large enough that boiling water won’t escape over the sides. Then, throw it in the microwave and set the timer to 75% of the box’s recommended cook time. (If it’s a range of times, set it to the lower option). I like to do this so there’s a chance to check on the pasta before it goes beyond the point of no return. Most of the time, the remaining 25% will get you right there.

Warm bowls are really nice. It’s a little thing, but every little thing helps. This is another tip I learned from Siracusa’s piece: put the pasta bowl(s) under your strainer, and let that hot pasta water sit in the bowl until it’s ready to accept the pasta. You may find this easier if you get a colander with arms that sits on the edge of the sink so you don’t have to hold it – I certainly do. Once you’ve strained the pasta, pour it back into your warm just-microwaved vessel and add whatever sauce you’re going to add. Since I assume you’re also cooking for one, I’m not going to go on about the superiority of homemade pasta sauce here. I’ve never made it. Just crack that jar open and pour some in, mix it up well, then empty your serving/eating bowl (careful, it’s hot and full of pasta water!) and refill it with pasta and sauce. Grate2 some Parmesan cheese on top while you’re at it. If you’re clever, you had some garlic bread cooking away in the toaster oven while you were doing all this.

Yours for the Making

A Manifesto On And For The Internet

The Internet kinda sucks right now. It’s always sucked, in different ways, but the current era we live in feels particularly galling. This piece was inspired by two things that happend on the 29th of May:

I’ll come back for the idiom later. Until then, please enjoy this long rambling collection of my thoughts on the matter.

Algorithims Rule Everything Around Us (If You Let Them)

The World Wide Web as we know it was originally perceived as a particpatory medium. For many, this promise wasn’t fully realised until the advent of social media platforms. These platforms are also the source of the Internet’s current structural flaws and foundational problems. At the same time, the very same platforms are enablers for much of the good that comes out of this stupid network of computers. We’d probably be better off as a society if Facebook was broken up into its constituent parts, but we’d be worse off if the functionality was lost forever.

The rise of algorithmic timelines is a menace. On some sites, it just can’t be avoided – Instagram is very unlikely to bring back the chronologically-ordered feed of posts. For your general web browsing, however, it is possible to escape the algorithmic feed of whatever Facebook wants you to read: just go visit websites. Foster Kamer wrote an excellent piece last year about this very topic.

Interent users of a certain vintage, your humble author included, remember the glory days of Google Reader fondly. We mourn its passing, but it’s still possible to get that experience and create your own newsfeed, from just the websites you’re interested in. RSS readers are still alive and well for computers, phones, and tablets. I’ve been using an open-source project called CommaFeed to bring back that Reader feeling, and if you’ve got a bit of server space, locally or out on the Internet, it’s a great service.

This Too Shall Pass

This isn’t the first time someone’s written this kind of thought. Marco Arment said it better all the way back in 2011:

If you care about your online presence, you must own it.

Everything on the Internet feels permanent, right until the moment it doesn’t. It’s not the solution for everyone, but if you really care about the things you create or how you appear, hosting your own website is the best way to preserve it. Web services come and go. Medium didn’t exist 5 years ago, and in 5 years it may not exist anymore. The Internet Archive, blessed and comptetent as they are, is not a valid backup or recovery strategy for catastrophic platform existence failure.

The Point I’m Trying To Get To Here

A better, kinder, and more open Internet is possible. It’s within our grasp – but we have to make it. This is the same guiding principle behind free/open-source software development: everyone’s able to contribute and make improvements according to their needs. Wikipedia would never work without these principles of openness and creativity, and its success is a testament to the fact that it can work.

With a few exceptions, blogs started to die out around the time Facebook really started to gain in popularity. The primary metric by which a website’s success is judged has become the length of time spent on the site, but the length of the content keeps getting smaller. Catchy videos took the place of long text diatraibes, and gargantuan multi-hundred-megabyte web pages became the norm. Website bloat is a known and serious issue, and nearly all of it can be attributed to useless bullshit.1

You might assume, at this point, that I’m feeling pretty bleak and hopeless about the future of the Web. This is a safe assumption to make, but I’m not fully despondent yet. There is still good out there, even if it’s a little more hard to find than it perhaps once was. Even better, you can make meaningful changes to your Internet experience and start rediscovering the joy in an afternoon or two.

Five steps to a better Internet:

No great work or human endeavour was accomplished without at least a little effort. The computing revolution offered hope that the level of effort required would be drastically reduced and made accessible to everyone. The dream is murky, but it’s still out there. I wrote this pompous-ass manifesto because I felt inspired to start doing something with this blog I set up and that I’ve been trying to do something meaningful with. My hope for myself is that I’ll keep writing and keep sharing it.

In conclusion, here’s that idiom from earlier that I’ve been thinking about:

You may recall (or have searched for) this old post, where I documented the process needed to get Linux booting on a Skylake-based iMac. Since that post, a few things have changed, and it’s about time for an updated post now that I’ve had a few minutes to try some things out.

Luckily, unlike last time, most recent versions of popular Linux distributions come with shiny new kernels. I’ve tested this with Fedora 27 and Ubuntu 17.10 – I fully expect Arch, or any distro with a default kernel of 4.13 or greater, to work similarly. Here’s the process:

In my testing, this setup persists and remains stable after installation and updates. Fedora 27, for example, was updated from kernel 4.13.9 to 4.14.14 as part of the standard system update process, and the kernel flags were retained and continue to work.